The Pound to Dollar exchange rate has slid to fresh post-1985 lows amidst a fresh onslaught by the U.S. Dollar.

The Dollar surged against the Pound, Euro and all other major currencies ahead of the weekend, continuing a well-understood trend of appreciation.

The gains came as global stock markets slumped, confirming safe-haven demand was a key driver of the Greenback’s gains.

This dries up liquidity on a global scale, raising the value of the Dollar.

Additional support for the currency comes as investors seek out U.S. assets which offer superior yields thanks to the Fed’s policy of hiking interest rates at a faster clip than elsewhere. 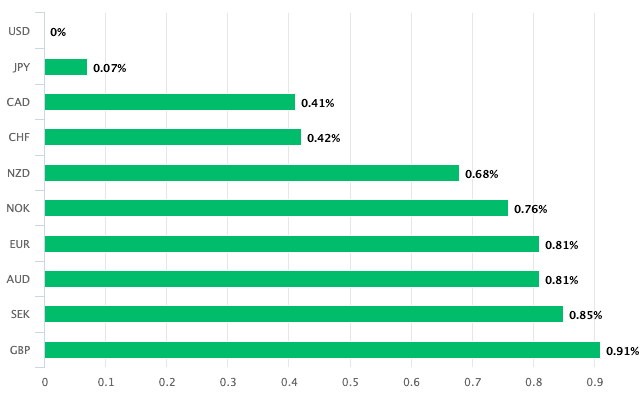 Above: The Dollar’s dominance continues.

“Sterling has sunk over 17% against the US dollar this year – a bigger depreciation than 2016 when Britain voted to leave the EU. From a technical perspective, GBP/USD could fall to $1.11 before finding some decent support, beyond which $1.10 may offer psychological support before the 1985 low of $1.05 comes into view,” says George Vessey, currency analyst at Western Union.

The Dollar surged and stocks fell after the Federal Reserve on Wednesday raised interest rates again and warned significant further tightening would be needed to quell inflation.

“The US dollar is stronger in the wake of another hawkish FOMC announcement,” says Derek Halpenny, Head of Research for Global Markets EMEA at MUFG. “This is frontloading like we have never seen before and gave a very strong signal of the Fed’s determination to get to a restrictive level of monetary policy as soon as possible.”

The 75 basis point hike was as expected but the general thrust of the Fed’s guidance on the need to hike further prompted the initial bid.

The 2023 median dot moved some 80bp higher from June’s forecast, suggesting the Fed will end its hiking cycle at 4.6%.

“The Fed’s messaging of restrictive rates for longer is evident, as the 2024 median dot was raised from 3.4% to 3.9%, while the newly incorporated 2025 projection suggests only 1.7 percentage points of interest rates will be unwound from next year’s peak over the following two years,” says Simon Harvey, Head of FX Analysis at Monex Europe.

Currency analysts say given the Fed’s stance, and expectations for further equity market underperformance, the Dollar should remain in the ascendency.

“I still consider this to be moderately USD-positive,” says Ulrich Leuchtmann, Head of FX and Commodity Research at Commerzbank.

“After all, things could have turned out differently. Powell had to answer some questions about a hypothetical future pause in the interest rate cycle. Getting that done without supporting those who want to interpret his words dovishly was not easy,” he adds.

Kamla Bhasin believed in the power of love, not the love of power

What are the worst foods for my anxiety?

Web3 technologies could be a game changer for the travel industry