How repairing the gut saves brain function after stroke 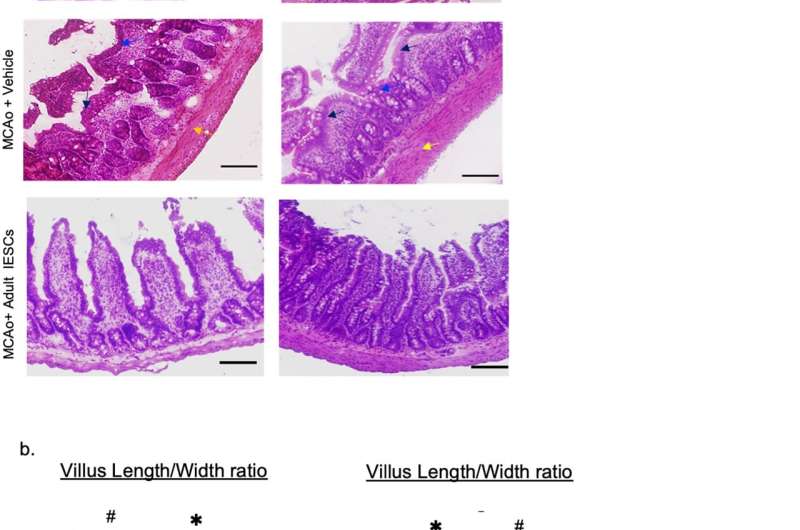 Stroke is a leading cause of death, dementia and serious long-term disability. According to the American Heart Association, stroke patients also have a greater risk of depression, which negatively affects functional and cognitive recovery.

The only Food and Drug Administration (FDA)-approved drug for treating stroke, which is a type of recombinant tissue plasminogen activator, must be given within a specific timeframe after stroke onset and has limited success. To improve stroke outcomes, scientists in the Texas A&M University School of Medicine are pioneering research into the connection between stroke-induced gut permeability, or leakiness, and cognitive impairment.

Two-thirds of stroke patients will develop cognitive impairment, while one-third of all stroke patients will go on to develop dementia, according to recent research, so there is a critical need for more effective stroke therapies that preserve cognitive function after acute stroke and that remain protective in the weeks following.

Although conventional stroke treatment research focuses on the brain, the gut responds early and rapidly to stroke with changes that may precede many of the inflammatory events associated with stroke-induced disease. These changes in the gut, such as increased permeability, likely result in the movement of products that are synthesized in the gut into the blood stream. Many of these products are toxic and therefore in a position to increase inflammation and exacerbate stroke-induced brain injury.

Evidence from a variety of studies demonstrates that IESCs repair the gut and reduce gut permeability. After a stroke, these repair processes may be critical to preserving cognitive function.

“It is clear that the gut-brain axis is involved in injury following stroke,” said Farida Sohrabji, Ph.D., Regents Professor, department head for Neuroscience and Experimental Therapeutics and senior author of the study. “Factoring in the effects of gut health on the brain following stroke may allow us to more effectively advance stroke therapies.”

With that in mind, Sohrabji and her team transplanted primary IESCs from healthy donors after stroke in a preclinical model. IESCs from young donors repaired gut architecture and decreased gut permeability and consequently decreasing blood levels of proteins and other molecules that are toxic to brain cells.

Still at the preclinical stage, this research highlights the importance of early therapeutic intervention after stroke and will guide future directions of the work. “Future studies will investigate refinement of the dosing and timing of the protocol,” Sohrabji said. “A systematic study of aging stem cells would also be important to explain why older patients experience more severe strokes.”

Sohrabji, a neuroscientist with significant contributions to the literature on stroke pathogenesis, explained that this preclinical study was spearheaded by Kathiresh Kumar Mani, Ph.D., an associate research scientist in her lab.

“Ultimately, this research is expected to advance development of novel therapies that target and repair the intestinal epithelium to help mitigate stroke disability,” Sohrabji said, “but the premise—that gut stem cells might be therapeutically valuable outside of the gut—could be considered for a much greater variety of neurological diseases.”