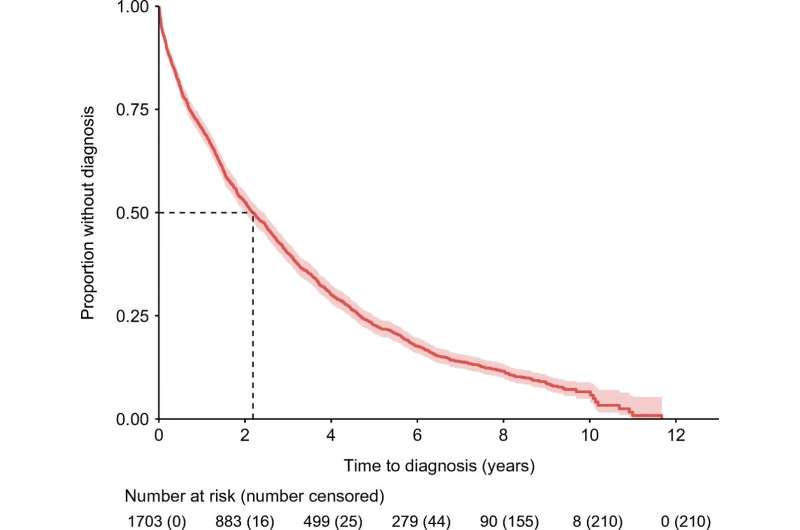 Using a standard diabetes test to screen all UK adults aged 40-70 years would find undiagnosed cases of type 2 diabetes more than two years earlier, and help those people begin treatment at a much earlier stage in their condition. The study is published in Diabetologia and is by Dr. Katie Young, Dr. John Dennis and Dr. Nicholas Thomas, University of Exeter, UK, and colleagues.

This is the first study to use real-world clinical data (from the UK Biobank) to determine by how much diabetes diagnoses would be brought forward in a large population cohort by the implementation of a diabetes screening program.

The authors believe the potential for finding undiagnosed cases earlier could be even higher that their study suggests, since the UK Biobank population is healthier than the general population, and ethnic minorities such as Black and South Asian people are underrepresented in the UK Biobank cohort and have higher rates of diabetes.

The authors studied UK Biobank participants aged 40–70 years who had their HbA1c (glycated hemoglobin) measured at enrolment. HbA1c reflects a person’s blood sugar control over the past 2-3 months, and is more widely used and convenient than the oral glucose tolerance test (another commonly used method). HbA1c is expressed as an absolute value (mmol/mol) or as a percentage, with a cut-off of 48 mmol/mol or higher (6.5% or higher) usually used to diagnose diabetes.

Given the known associations between both non-white ethnicity and higher social deprivation and increased risk of diabetes, the authors say the prevalence of undiagnosed diabetes in this age group in the wider population is likely to be higher than that observed in UK Biobank (1.0%); studies in other UK cohorts give estimates of 2.8–4.5%.

In addition, as UK Biobank participants are likely to be more health-conscious than average, similar to volunteers in other research studies, they may have more frequent health care appointments and so may be diagnosed with diabetes earlier. This suggests that screening initiatives in the ‘normal’ general population of adults aged 40-70 years could identify even more cases of undiagnosed diabetes and reduce the time to diagnosis even more than the 2.2 years seen in this study.

However, they also add that increases in opportunistic diabetes testing during and after the study period may mean that any screening initiative implemented today would provide less substantial benefits than the 2.2 year improvement observed in this study, as supported by the reduction in time to diagnosis seen in the study between recruitment in 2008 and recruitment in 2010.

However, other issues have hindered diabetes testing recently, including the COVID-19 pandemic which resulted in both fewer HbA1c tests and delays in diagnosis of type 2 diabetes. Health care spending in the UK is under intense pressure as economic circumstances worsen. The authors say that all this means “diabetes screening initiatives might be more important than ever to prevent long delays in diagnosis”.

The authors also highlight that unless ways to identify people at risk of diabetes (diabetes risk scores) are improved, population-based screening with HbA1c is the only way to reliably identify undiagnosed diabetes. Currently in England, the NHS Health Check for adults aged…